GAI Waterhouse’s bid for an astonishing eighth Epsom victory may look ambitious at first glance but the stable insists it’s anything but a throw at the stumps.

Fabrizio, Waterhouse’s only Epsom runner, firmed from $11-$8.50 on Tuesday after drawing barrier six for Saturday’s $1 million feature at Randwick. The five-year-old will be ridden by Frenchman Johan Victoire.

Fabrizio comes into the Group 1 off a dominant benchmark 84 win where he ran his rivals into the ground over the Randwick mile and Waterhouse’s co-trainer Adrian Bott hinted the five-year-old would adopt similar ‘‘catch me if you can’’ tactics this weekend.

“I think he will stick to the racing pattern that has been successful for him and with the light weight you probably have to take advantage of that,” Bott said.

“He is a horse that does have good staying capabilities and I think that is why he can sustain a good, strong run like that over the Randwick mile, and sometimes that’s the key.” 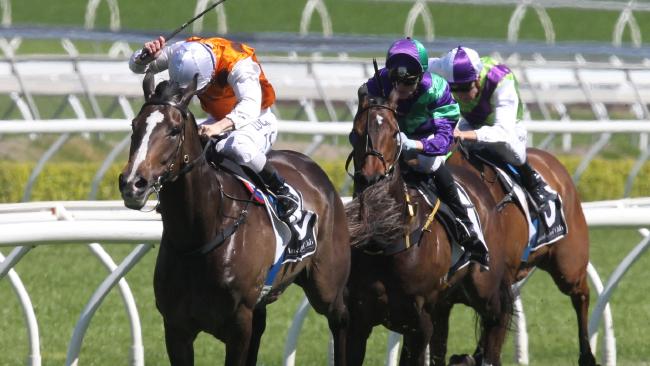 Bott admits the Epsom was never the target for Fabrizio this spring but said the gelding was a genuine chance with just 50kg on his back.

“As a lightweight chance under the handicap conditions he is certainly worth a crack at a grade like this,” Bott said. “He appreciated his home track the other day and it was a strong Randwick mile and there is no reason he can’t repeat that performance again.

“Originally we wanted to take him through the grades and take our time with him but I think it is too good of an opportunity to miss, and when a horse is in such good form like that you have to take advantage and capitalise on that.

“Obviously Gai has had a lot of time for this horse and it’s not just a throw at the stumps. He is a horse we identified from very early on.”
Waterhouse holds the record with her father TJ Smith for most Epsom Handicap wins at seven but Bott will be searching for his first Group 1 victory after commencing a partnership with Waterhouse in August.

“Emotions are running high going into Saturday and obviously it’s a great buzz,” Bott said. “I feel really good about our chances across the board and not just in the Group 1 races but in other races on the card as well.”