Trainer Gerald Ryan is confident that boom colt Menari can confirm his Golden Slipper credentials when he steps out in the Gr3 Canonbury Stakes (1100m) at Rosehill on Saturday.

The flashy 2YO with a conspicuous white blaze looked a smart juvenile in the making when posting a comfortable debut victory over 1100 metres at Randwick two weeks ago. 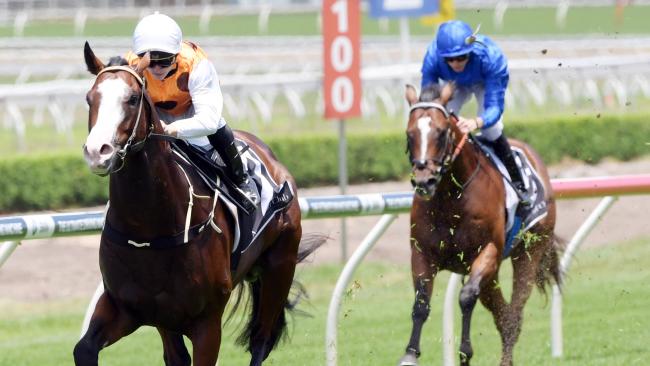 On that occasion apprentice jockey James Innes Jnr predicted a big future for Menari labelling him the best 2YO he had ever ridden.

“He has won a race and Chauffeur has also won and finished second in the Magic Millions so they are the best two [juveniles] at the moment,” Ryan said.

“I think Menari is a Golden Slipper type.”

A homebred for George Altomonte’s Corumbene Stud, Menari is by Snitzel out of the stakes-winning mare Isurava (General Nediym-Cut A Dash, by Whisky Road), a full sister to Gr2 Magic Night Stakes winner Ichihara and Listed winner Au Chocolat.