While most racing fans are cursing the prospect of a bottomless track and endless rain for Golden Slipper day, veteran breeder George Altomonte can’t help but wonder if the heavens are sending him a brighter message.

You see, Altomonte has been involved in two Slipper winners before, and both have prevailed in soggy conditions.

“Maybe all this rain is a bit of good luck,” he said.

“It was a very soft track when Overreach won (2013) but it was very, very heavy for Sebring in 2008. They say it will be bottomless on Saturday, maybe my horses like that in this race.”

Altomonte is one of the most respected breeders in Australia and his Corumbene Stud is a reliable source of Group class racehorses; Sebring was bred and raised there before being sold as a yearling, as was Overreach and another star juvenile, Blue Diamond winner True Jewels.

And so too were Menari and Single Bullet, Corumbene Stud’s two representatives in Saturday’s $3.5million Golden Slipper.

Single Bullet (pictured below), like Sebring and the majority of horses bred and raised at Corumbene, was sold as a yearling, knocked down for $150,000 at the Magic Millions National Sale to the bid of trainer Gary Portelli. 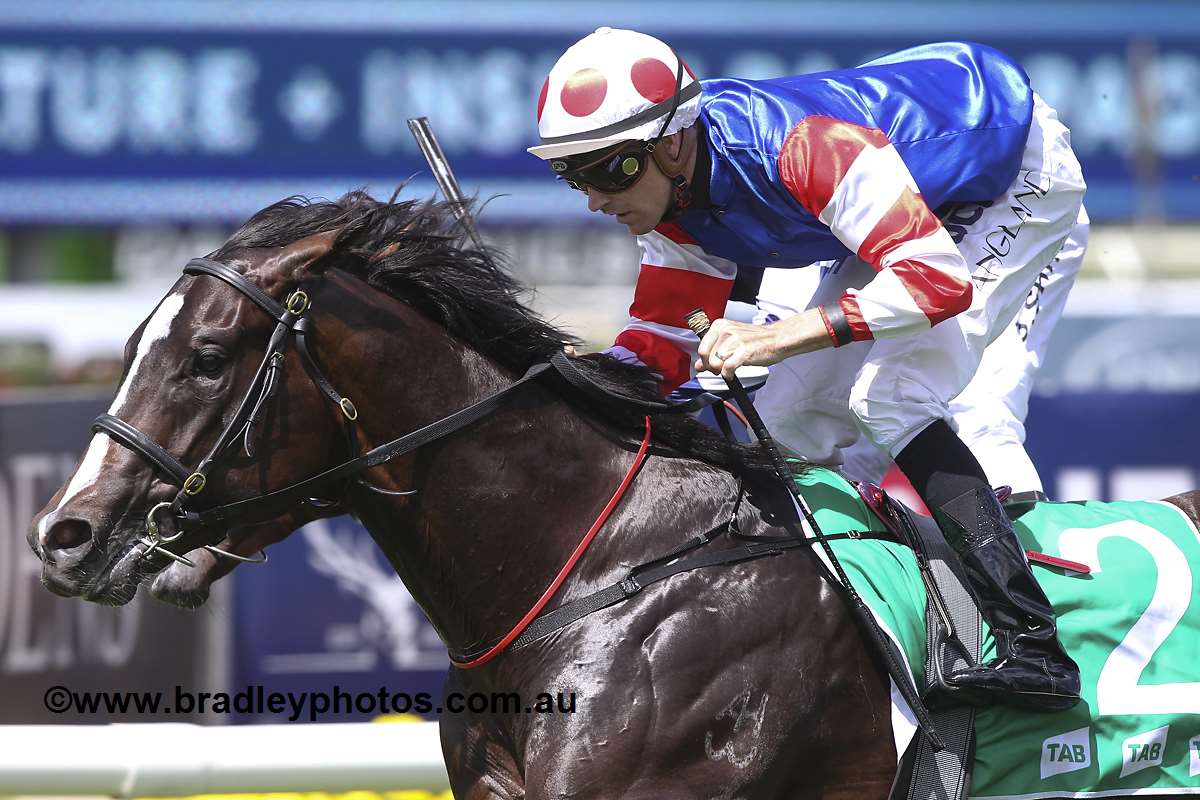 “He was a lovely young horse and I always keep an eye on the ones we sell. For me, it’s just as exciting if a horse we breed but don’t race wins something, it’s a great thrill and it will be if he wins on Saturday,” Altomonte said.

Meanwhile, Menari was deemed unsuitable for auction after x-rays and withdrawn from the 2016 Magic Millions Gold Coast Sale. The colt was retained to race by his breeder, just like Overreach – which like Menari, drew barrier one when she won the Golden Slipper.

“He (Menari) had a little issue on x-ray with a knee,” Altomonte explained.

“If they’ve got an issue like that the buyer thinks they can get them for nothing. We don’t like to offer them for sale with issues and we prefer to take the chance and race them ourselves, I glad we did with him.”

A wide margin barrier trial win at Rosehill in December 2016 paved the way for an impressive debut win at Randwick in January, but since then Menari has endured a healthy dose of bad luck.

Hopelessly held up on the rails in the G3 Canonbury Stakes, the colt flashed home for an unlucky second to subsequent Blue Diamond runner-up Pariah, then split a lip and went 48-days between runs into the G2 Todman Stakes when a wide run and a heavy side-bump put an end to hopes of victory.

“Sometimes when a horse gets a heavy bump on a wet track they slide and skate and lose confidence and I think that’s what happened to him,” Altomonte said.

“He was coming on into the race well but then got that bump. Gerald (Ryan, trainer) is confident he’s going to run very well on Saturday.”

They key to Corumbene’s success over the last 38 years has been maintaining a high quality band of broodmares, a group that Altomonte is continually adding to with the best race fillies and mares that carry his orange, white, and brown colours eventually retiring to the herd.

“Overreach is there. She went to Sepoy in her first season but the foal died which was very sad, but she went to Fastnet Rock and then Snitzel last year. Hasna (third in the 2003 Slipper) is there too,” Altomonte said.

“That’s the key to (breeding) success, you have to have high quality mares and you have to be very selective.

“If they don’t produce a good foal in the first two or three seasons I move them on, that’s how it has to be if you want to be at the top end of the breeding game.”

Monday’s easy all the way Moonee Valley winner Cassadee is another destined to join the Corumbene herd when she finishes on the race track, but not before a crack at the Australian Oaks at Randwick in April.

And Menari too could have a future at stud with the handsome son of Snitzel a prime candidate to train on beyond his two-year-old season and develop into a top line three-year-old colt.

“I think that on a dry track he’s going to go on and win some serious black type races,” Altomonte said.

“He’s got a lot of ability and he has the pedigree to match being from the family of Tie The Knot. You never know what the future holds for him.”