Hong Kong came back, saw and reconquered at Singapore’s return to International racing on Saturday night when its two contenders Southern Legend and Horse Of Fortune stole the quinella in the $1.5 million Invitational Group 1 Kranji Mile (1600m).

The former British colony have been a long-time supporter of Singapore races during the time the former Group 1 Singapore Airlines International Cup (2000m) and its sister sprint feature, the Group 1 KrisFlyer International Sprint (1200m) were staged for 15 years at Kranji.

Billed as the best horse in the 13-horse field all week, Southern Legend, who was given an international rating of 115 points, is the latest name from Sports Road to add its name to the Kranji roll of honour. Even if technically, it was not an International Group 1 race yet, it had all the makings of one, and it sure felt like déjà vu when the red Bauhinia flag picked up where it had left off.

Jumping smartly from marble one, Southern Legend, a Not A Single Doubt five-year-old prepared by Kranji frequent flyer Caspar Fownes, was bustled up by ace jockey Zac Purton to hold down his pole position given there were a few vying for that spot when the gates crashed back.

Once up there in the driving seat, Purton turned off the power to sleep mode, with his mount never turning a hair even when Maximus (Troy See) came cocking a snook to the visitor midrace.

The Alwin Tan-trained galloper continued on his cheeky run as he took a stab at glory just before the corner when he was the first greet the judge, but Purton was unimpressed, still letting Southern Legend bowl along on a long rein.

Horse Of Fortune had in the meantime popped off the fence to jostle for a run as he collared Maximus three wide while Circuit Land (Alexis Badel), the tough-as-nails Chairman’s Trophy winner was aiming to replicate the same searching run out in wide territory.

They were in for some sight.

As Southern Legend niftily cut the corner at the point of the turn, he effortlessly ambled back to the lead. Purton redid his reins, threw out the anchors – and accidentally, his whip, but it would not matter – the Hong Kong galloping machine was set in full flight.

Behind, the wheels were spinning amidst the chasing pack. Horse Of Fortune looked one-paced but was still holding sway in the battle for second place. Among the locals, the top picks like Infantry (Vlad Duric), Elite Excalibur (Michael Rodd) and Circuit Land were struggling to conjure up their usual dash.

Southern Legend was already out of reach as he romped in by three lengths from Horse Of Fortune for a Hong Kong 1-2 that many had already forecasted after they respectively drew gates one and two at the barrier draw on Thursday night. 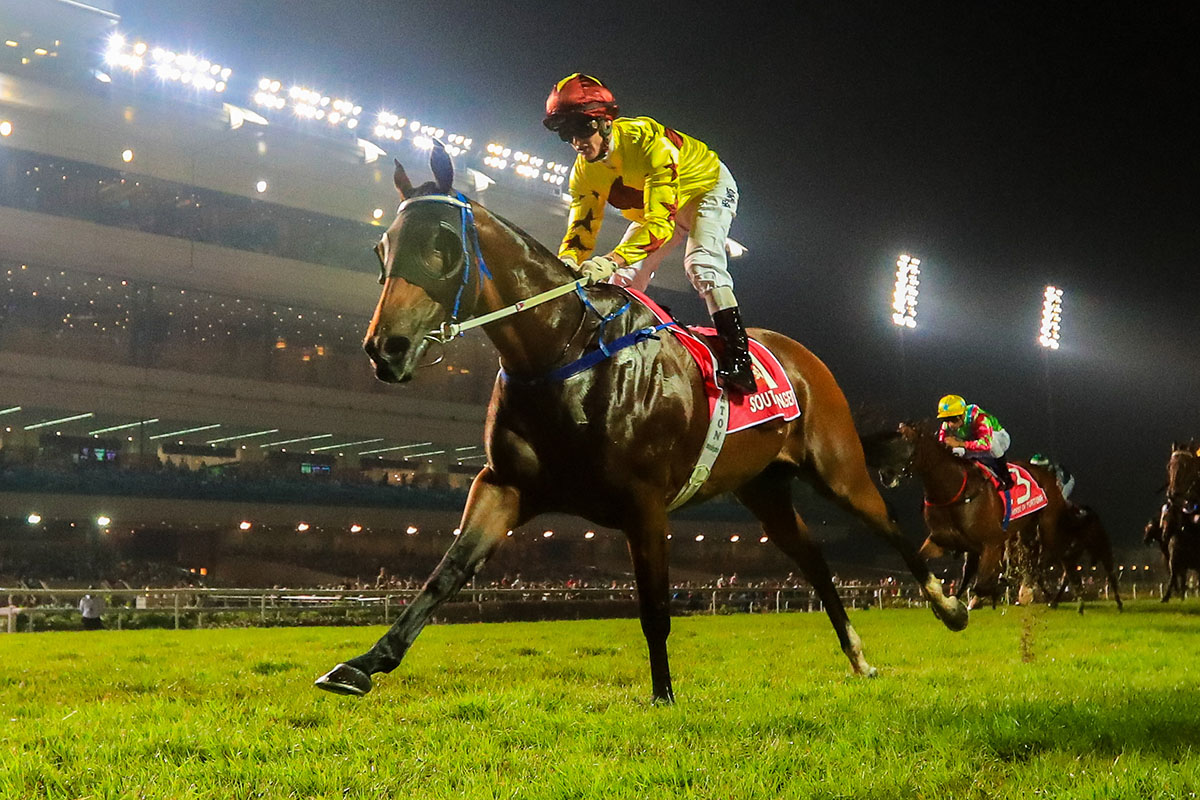 Showing the benefit of a ground-saving run in the box seat, Tan’s third runner (after Infantry and Maximus) beat Clarton Super (Azhar Ismail) to third place by a neck. The Tan Kah Soon-trained galloper also picked up a bonus for being the second local runner past the post: $50,000.

Sent out as the even-money favourite, Southern Legend clocked the smart time of 1min 33.79secs for the 1600m on the Long Course, only 0.51 second outside the record established by Magneto in 2014.

Singapore Horse of the Year Infantry made a genuine bid at the 400m mark, but he was eventually outrun and took fifth place another three-quarter length away.

The disappointments were Elite Excalibur (11th) who never showed any hint of his customary turn of foot and Donna Logan’s New Zealand multiple-Group 1 winner Volkstok’n’barrell (Craig Grylls, 12th), who was, however, making his Singapore debut in the Kranji Mile.

Fownes, who had missed only one day of trackwork (Wednesday to head back for the Happy Valley meeting) since Monday, was at his fourth Kranji triumph after Green Birdie and Lucky Nine.

“He’s a real dude this horse. He was chilled throughout his stay here and has really enjoyed himself,” said Fownes.

“He was a fit horse. We made sure he had enough work and he trialled prior to coming to Singapore.

“He’s a versatile horse who can handle any type of going and obviously any direction as well, as we saw tonight (they go the other way in Hong Kong).

“I’m very happy for the connections because I had to convince the owner (Boniface Ho Ka Kui) to come here. I told him horses travel good these days, it’s a lot easier, just like for us, humans.

“Travelling can only do them a world of good.” 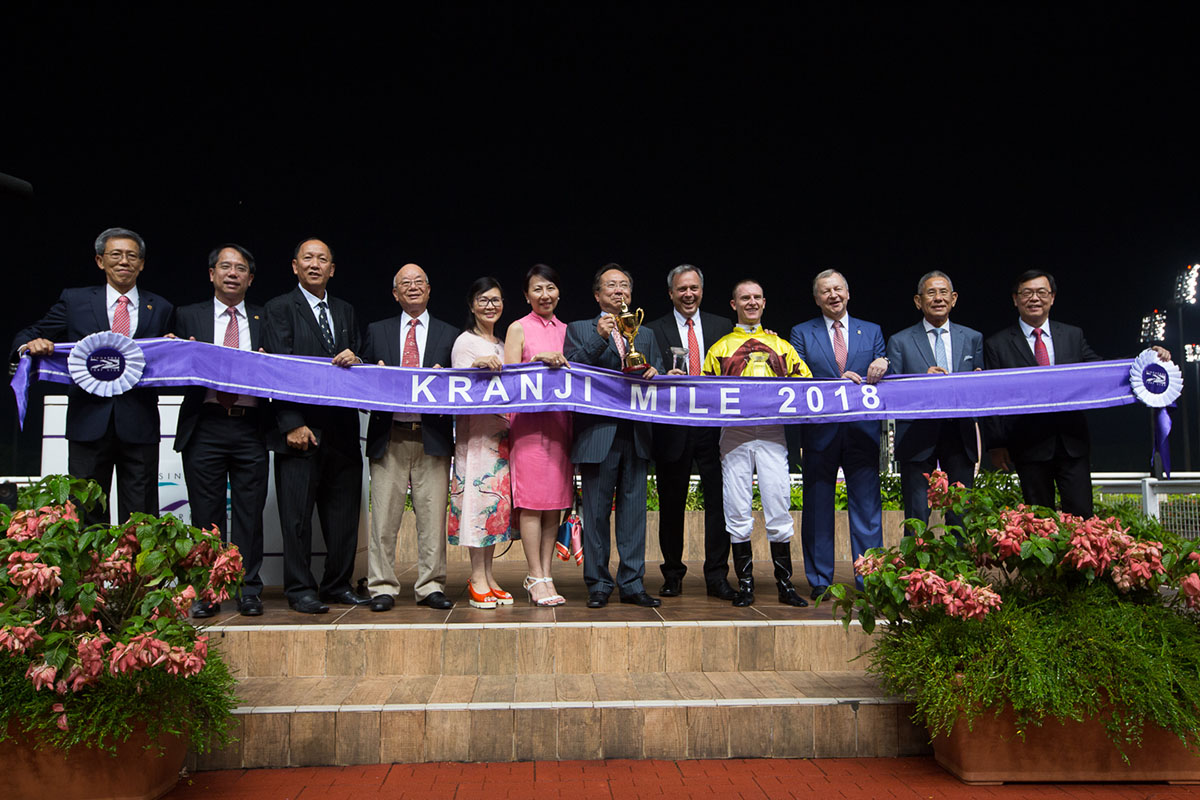 When asked about Southern Legend’s future plans now that he has an offshore win under the belt, Fownes said he would target the gelding for the Internationals on his own turf, the Longines Hong Kong International Races in December.

“He’s pretty much done now. We are going back to Hong Kong on Monday morning and enter quarantine,” he said.

“He’s come a long way since the start of his prep. He will come out and improve a bit further from that and he will be set for the December Internationals when I bring him back.”

As for Purton, that purple patch he had struck in Hong Kong seems to know no boundaries. He currently lies in second place only six winners off perennial leader Joao Moreira, who begins a two-day suspension next week, opening the final run to the wire wide open.

“It’s great to ride in Singapore. It’s a special place and it’s even better when you win,” said Purton who was at his second big-race haul after capturing the $1 million Group 1 Singapore Guineas (1600m) aboard Mr Clint earlier, and already boasted one SIA Cup (Military Attack) and one KrisFlyer (Aerovelocity) to his name.

“I had a lovely position in the lead. I was only a bit worried when they came across three deep to put a bit of pressure on us.

“But he was not overracing and had a nice rhythm to his action. At the 400m, I gave him a squeeze and he picked up really well.

“I knew I had the race won when I looked at the screen and nothing was coming.

“I ride a lot of Caspar’s horses at home. We’ve been teaming up very well and it’s great to ride a winner for him overseas.

“Things are going well for me back home as well. The winners are coming, but I need more winners, it’s never enough.

“Recently Joao has not been riding for a few trainers, and it’s freed up a few more opportunities for us. We’ll see how the rest of the season goes, it should be interesting.”

Tony Millard, trainer of the runner-up, was gracious in defeat, accepting they got beaten by a better horse.

“He ran a great race, but Caspar’s horse was the class horse and he was just too good for them,” said the South African handler who has been training in Hong Kong for 19 years.

“He got a bit of bumping at the top of the straight, but no excuse, I’m still very happy with that run. He’s seven now, but he still ran above his class, that’s all you can ask for.

“He’s as honest as they come. It was a great experience, and I hope to come back with another horse next time.”