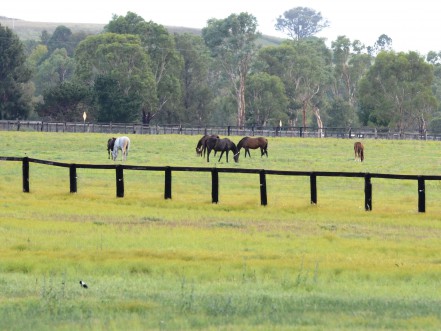 Good ground, the value of patience and superior horsemanship

Good ground, the value of patience and superior horsemanship are all key ingredients to the success of Corumbene Stud and of course, a bit of luck.

Despite the drought, the drive to Dunedoo is breathtaking. Like something straight out of a storybook, rich farmland renowned for wheat, cattle and sheep production stretches for miles.

It’s easy to appreciate how this country inspired the prose of one of Australia’s greatest writers, Henry Lawson, who lived much of his life just down the road.

He’s not the only famous former inhabitant of this part of Central Western NSW, it’s also where one of the world’s best jockeys and a hero of the Winx (Street Cry {Ire}) legend, Hugh Bowman, hails from.

Plenty of good horses have been bred and raised in Dunedoo too. 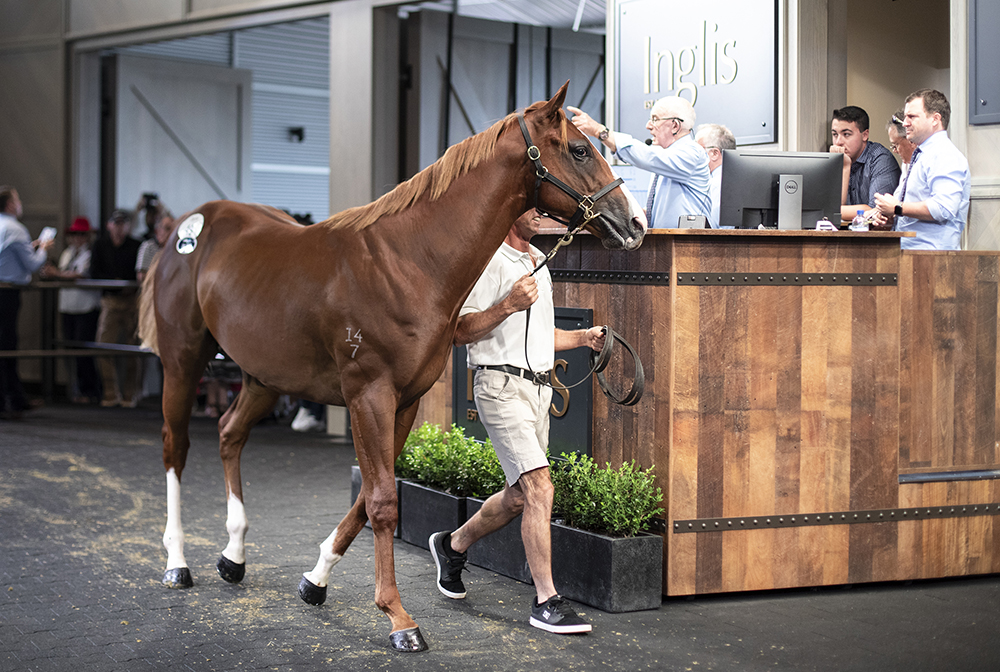 Since the 1980s its been home to George Altomonte’s Corumbene Stud which has produced everything from 2013 Golden Slipper winning filly Overreach (Exceed And Excel) to this year’s Inglis Easter Yearling Sale topping Snitzel colt that sold for $2.8 million.

Their latest star racing graduate is a full brother to Overreach, the well named flashy chestnut colt, Standout (Exceed And Excel), that lines up in this Saturday’s G2 Roman Consul S. for three-year-olds at Randwick (1200 metres).

Set on 13,000 acres of what they like to call “good ground” in the bush, Corumbene Stud is a magic spot and according to George this piece of prime land is without doubt one of the main ingredients in the brand’s consistent success at the top level of racing and sales over the past three decades.

“There’s something special about the minerals in the soil. It’s definitely good horse country,” said George.

“Years ago, I looked at moving closer to Sydney but I thought gee why would you want to leave Corumbene. A lot of horse places close to Sydney are not producing winners.

“It must be something with the area. We have Gooree Stud down the road and they do pretty well also.”

The son of a market gardener, George was exposed to horses at a young age and that’s where the passion was ignited.

“I just loved horses. I grew up with Clydesdales. My dad used draft horses to work his market garden. I have always had an attachment to horses, I just like them.”

Whilst in more recent years he’s been mainly known as a big player in the car trade as well as property development, farming remains his great passion and is also a significant part of his business portfolio.

“I used to have a place at Singleton when I started. Back then I used to see a lot of cattle coming in from the Dunedoo area and they were outstanding. I thought it must be pretty good country to have such good cattle so I sold Singleton and moved to Dunedoo.”

A deep knowledge of and passion for the land is unquestionably influential in the success they enjoy with horses but another key factor is Corumbene’s longtime Stud Manager Toby Frazer. 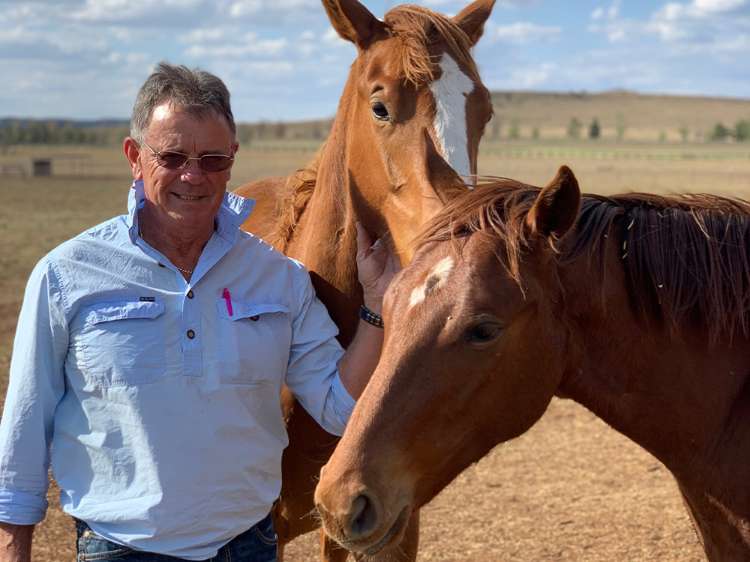 “I think it’s the system that we work to with Toby. He looks after the horses and he’s a very good horseman.

“I do the breeding and he looks after that side of it. We work together pretty well and bounce things off one another. We have to co-ordinate. You can breed but you need to know what stallion goes better with what mare and together we come up with a final decision.”

Toby grew up at Grenfell in Western NSW and when you’re in his company it’s easy to tell he’s a horseman through and through. On the back seat of his 4WD sits a swinging fender stock saddle, bridle and other bits and pieces of horse gear.

The son of a trainer and brother of Hawkesbury based trainer Garry, Toby was always either on or around a horse during his childhood.

“I played a lot of polocrosse and always liked to have a nice horse to ride and be around. I learned a lot from being with people that were older and we used to work a lot of weekends doing cattle work and you got good at it. You had to and if you weren’t you wouldn’t get the job.”

The value of patience

Breaking in horses also became an important part of his repertoire and taught him the value of patience.

“You learn by mistakes and get better. You have to be patient and understand. You can make him or teach him, and if you teach him, he will enjoy it the other way won’t work as good.”

With the first half of his life spent gathering invaluable horse skills, Toby ventured into the thoroughbred breeding world to earn a living. 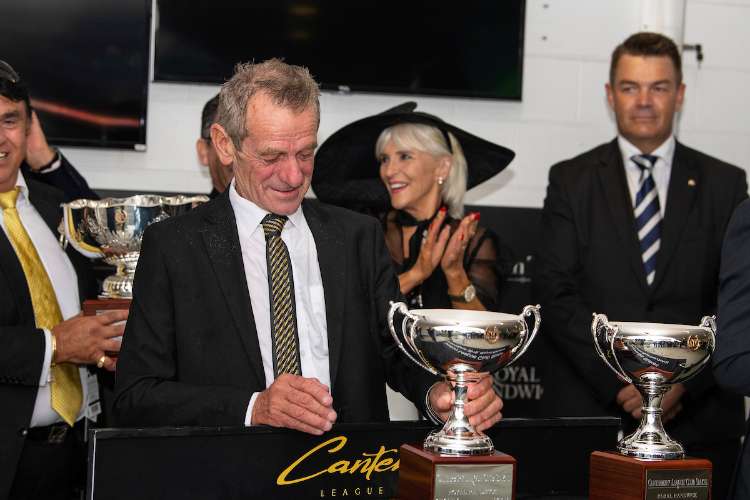 He spent 15 years working at Newhaven Park and after some time away from horses he applied for an advertised role at Corumbene and got the job. That was 20 years ago.

Over that time, his commitment and having a good working relationship with George has helped reap plenty of rewards on the racetrack and in the sales ring for Corumbene.
His superior horse skills have also come in handy and those that train for the stud respect and value his knowledge and input.

“A lot of trainers wouldn’t take notice of a stud master because they think I’m the trainer and you are the stud master but the combination can be a big influence.”
Toby works closely with Standout’s trainer Gerald Ryan who has been preparing Corumbene’s racehorses including the likes of Menari (Snitzel) for the past six years. 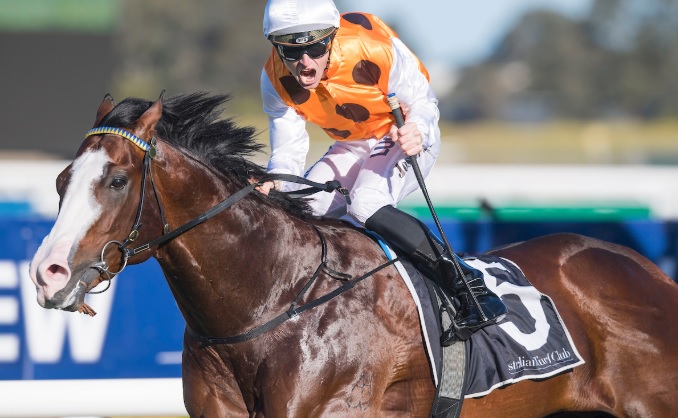 “I said to Gerald ‘you’ve got a special horse coming down to you’ and, touch wood, that’s happening. You think I hope I’m right with this horse because I always thought he would be a good horse. It doesn’t always turn out that way.

“It’s good to have that communication with Gerald. He might try this or might try that and I think we probably think alike. It’s like anything, two heads are better than one,” he said.

Toby vividly recalls his early observations of Standout as a young horse.

“George would say how’s the Bahia (Snippets) colt and I would say he was a standout. If you saw him in a mob of horses in the paddock you would say what’s that horse because he just stood out. He had a great character and brain on him and you really get to like horses that can cope and become so easy to do anything with.
“All good racehorse colts and stallions have to be like it because they won’t race properly. Look at horses like Lohnro he didn’t worry about mares being around and had his mind on the job.” 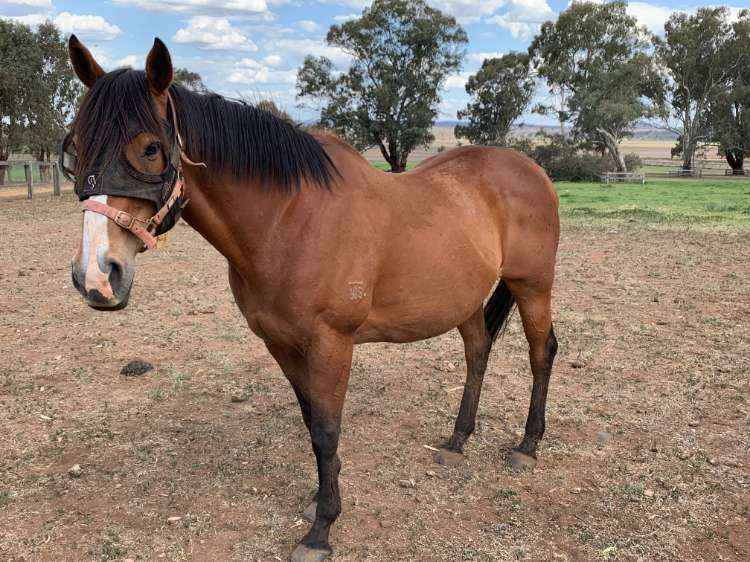 Bahia, the dam of Standout

Gerald has taken his time with Standout and Bottega (Snitzel), another unbeaten colt that races in the Corumbene colours, and this suits their philosophy.

“Gerald has been really good and patient with them. We don’t race or gallop them until their knees are closed. We still educate and work them but don’t get them and flog them around.

“Bottega and him have been brought along very quietly and he’s taught them to settle in a race.”

George, now aged in his 80s, currently has two very good horses on his hands and there’s high hopes for Standout in particular. 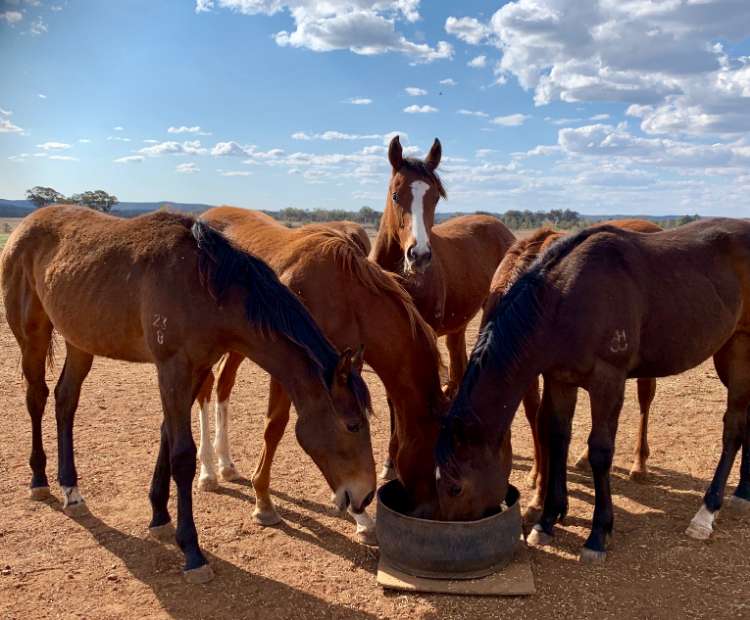 “Gerald thinks the world of him. He could do anything that horse. He’s a nice looking horse and he ticks all the boxes,” said George.

That faith will likely to be vindicated this Saturday when Standout steps out to maintain his unbeaten race record in the G2 Roman Consul S.

Win, lose or draw at the weekend, one thing’s for sure and that is that nothing will change back at Corumbene.

“A bloke once said to me I don’t know what you do, but whatever it is, don’t change and I thought that was fair enough,” he said. 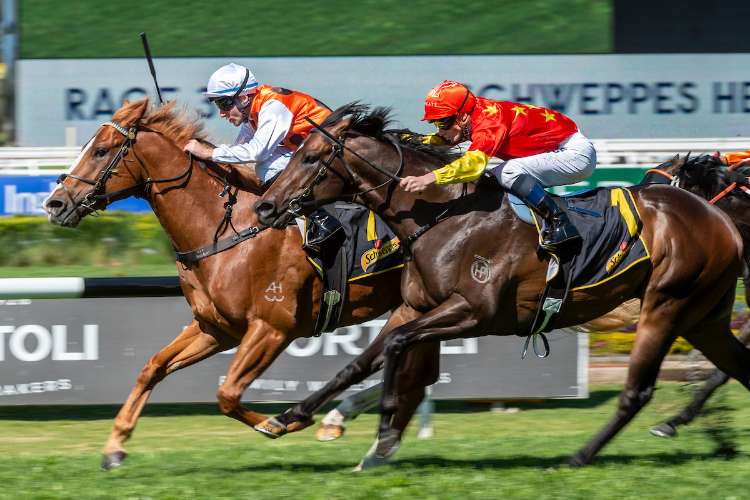 Standout (white cap) will step out in the G2 Roman Consul S. this week