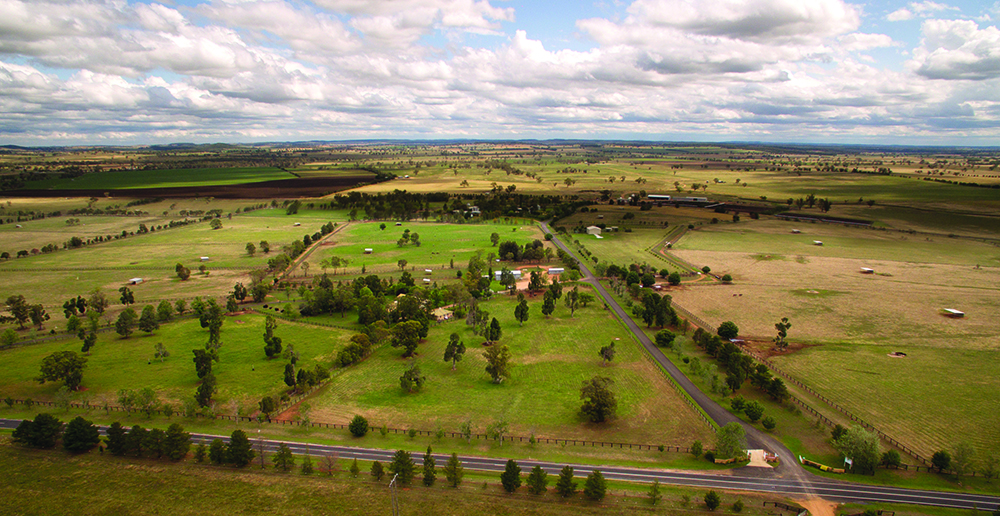 There has been a Golden Slipper winner in Sebring, a Blue Diamond winner in True Jewels and the flying Southern Legend, a Stakes winner in Sydney before carving out a successful career in Hong Kong, to name but a few.

The reputation Corumbene has forged for offering the highest quality stock for sale has at its foundation a willingness to provide that bit extra to ensure the proper development of their horses in their formative years.

One imagines a farm that relies heavily on its home grown crops to feed its stock would be at a disadvantage, but Stud Manager Toby Frazer is adamant the draft Corumbene send to the Gold Coast won’t have missed a trick. “It’s a terrible drought that’s for sure, but we’ve still been able to feed our horses their normal rations and a bit more. Buyers won’t notice a difference to our normal routine, in fact history shows some of our best horses have been born in drought so maybe this crop will have that extra bit of toughness about them.”

Leading off the Corumbene draft will be Lot 12, a smart colt by Your Song out of the So You Think mare Varese, a half-sister to Sebring (More Than Ready) and also to the Gr.2 Ajax Stakes winner Pureness (Tale Of The Cat).

Toby believes this fellow will be “an early goer” and that is borne out in the pedigree as his grandam Purespeed (Flying Spur), besides being the dam of Sebring, is a half-sister to the very good juvenile from Western Australia Surtee (Memento) who won the old Gr.3 Brambles Classic at two and then the Gr.2 San Domenico Stakes when that race was over 1000 metres. The stud will also offer a Your Song filly as Lot 696, a granddaughter of the Champion 2YO filly Hasna through Romincka, a young More Than Ready mare who is already the dam of a two-year-old winner. Toby was full of praise for this filly. “She’s one of those fillies that turns heads. If she walked past you would want to know ‘who’s that by?’”

Amongst Corumbene’s offerings is a son of Zoustar, this one the first foal of the Mossman mare Warringal Moss who hails from the family of Gr.1 W S Cox Plate winner Pinker Pinker.

“He’s a big, strong colt, not typical of a first foal,” said Toby. And, of course, George and Toby recognised early the quality More Than Ready brought to the table when they bred Purespeed to him and this sale they will offer another of his colts, this one out of the twice winning Redoute’s Choice mare Celestial Choice. “More Than Ready is a great sire, it doesn’t matter how old he gets he keeps stepping up and getting good horses”, said Toby. The colt traces back to New Zealand Two Thousand Guineas winner Foxwood (Centaine).

The now Widden based stallion Outreach, the brother to the Altomonte raced Overreach, had his only start in George’s orange, brown and white colours silks and the stud continues to support the son of Exceed And Excel with his first runners hitting the tracks about now. Buyers will have the choice of four by Outreach in the Corumbene draft headed by Lot 75, a filly out of the Charge Forward mare Alessia and a filly that Toby rates highly. “This is a very good filly. She has the strength of a colt which I like as some of the better mares we have seen have that trait. I like this filly a lot.” Of course, Charge Forward mares delivered back to back Golden Slipper winners in She Will Reign (Manhattan Rain) and Estijaab (Snitzel) and with Alessia a half-sister to the Gr.2 winner Bennetta (General Nediym) this filly is sure to be popular.

The stud will also offer an Outreach filly out of Daytime, a Choisir half sister to the dam of Gr.1 Golden Rose winner Exosphere (Lonhro). “We race Daytime’s first foal which is unbeaten in three barrier trials to date for Gai Waterhouse and Adrian Bott so by the time the sale arrives we are hopeful she will be a winner.” This girl might have some upside for buyers.

George Altomonte raced Wager (Flying Spur) who was an outstanding filly winning twice at Gr.2 level and being placed in the Blue Diamond, AJC Sires’ Produce and Champagne Stakes all Gr.1’s. She is also proving to be an excellent source of black-type, her granddaughter Betcha Flying (Uncle Mo) the most recent to enhance her reputation over the Melbourne Spring Carnival. Corumbene will offer a smart Dissident colt out of Wager’s unraced daughter Gamble (Encosta De Lago) as Lot 328 and a filly by promising young sire Brazen Beau out of the More Than Ready mare Posta as Lot 645. This is a family that has grazed the Corumbene paddocks for several generations now, Wager being a granddaughter of George’s Black Opal Stakes winner Marks Gain (Biscay).

We mentioned earlier the success of mares by Charge Forward and Lot 106, Choisir’s attractive daughter out of Avanzar, has him as her maternal grandsire. She counts the Gr.1 Hong Kong Sprint winner Inspiration (Flying Spur) and Gr.1 Australian Guineas winner Wandjina (Snitzel) as relations while Avanzar’s first foal Avno Doubt (Not A Single Doubt) won a recent two-year-old barrier trial by five lengths hard held.

The first crop of Pride Of Dubai have come out running with a Stakes winner to his credit already and Corumbene have a daughter of his for sale as Lot 764. “Another big, strong filly with a lovely attitude. She has everything you could want in a racehorse and her dam was very good on the track.” The mare Toby refers to is Snitzel’s daughter Sheer Style, winner of the Clockwise Classic at Ballarat and third in the Magic Millions Wyong Classic at Restricted Listed level.

There is always an air of expectation about a Corumbene draft and that is no different with their 2020 Magic Millions offerings. Buyers know they’ll be purchasing something with a touch of class, and who knows, maybe even a bit of drought enforced added toughness.